The project theorizes the city as a multiplicity, a structure of spaces of possibilities while at the same time trying to establish a liaison between the city's properties, tendencies and capacities. While properties are actual and can be observed, tendencies and capacities lie in the virtual level, they are only actual when exercised. In this framework, Hecate is the city's apparatus; an urban "mining" system able to decipher, map, connect, or navigate itself through the superimposed layers in-forming the city's layout. Hecate is an interactive city scape, a complementary organization to the actual city. It is visualized as a network of richly interconnected nodes of varying intensities, each representing information flows between the system and the city. Hecate has the performance capacity of an elastic urban fabric that associates and disassociates, controls, determines and consumes both existing and emerging urban structures. Hecate is itself a new map of the territory, in constant flux.

studioentropia is an interdisciplinary design studio that integrates architecture and the visual arts. Based in Athens, Greece and founded in 2007, the studio's expertise is on architecture and art installations. By integrating theoretical speculation, multi-disciplinary collaborations and consistent innovative disciplinary approaches we theorize architecture as a versatile, dynamic, and open spatial system justified by its ability to differentiate while subject to constant change. 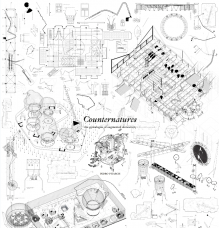